The Strongest Characters in the World are Obsessed With Me 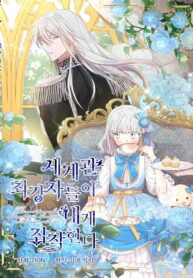 The Strongest Characters in the World are Obsessed With Me Average 4.1 / 5 out of 880

One day, when a thirteen year old was chewing on some bread that came out as a snack, Dahlia Pesteros suddenly remembered her past life. This was the world of the tragic otome game where the characters went crazy, and she was born as the person who would become the greatest villain in the future’s younger sister! At this rate, there was no answer. The household would be exterminated, and I would also get my head cut off. That’s why I have to get out of this household as fast as possible! ‘I have to make him put his guard down and escape!’ It was going well up until I got rid of the relative who was aiming for the household, the snake-like Emperor, and got Brother’s approval, but- “I want to dance with Dahlia. What’s the problem?” “Unfortunately, my younger sister is shy.” “I said that I like Dahlia the most!” Somehow, I’ve tamed my brother too much, and the strongest characters in the world are obsessed with me!

I Failed To Throw The Villain Away

I Lost the Leash of the Yandere Male Lead